It is only in recent years that this realisation has dawned on me, since my earliest memory of politics in the UK, until today, the only constant has been the policies of fear.

People are scrambling around in support of their chosen party, Steve Coogan, Delia Smith, Ronnie O’Sullivan and now Russell Brand have all had their say and called on us to vote Labour, to remove this Conservative Government, but is that all we have become, a society of protest voters?

It is well documented that I have long advocated a position of not voting, in favour of a more active, disobedient approach to getting things done and creating change. In doing so, I have been more politically active than many people who like to sit on their proverbial perches, throwing stones at me for my belief’s and betrayal of democracy and those that died for it. Before you start throwing suffragette’s or civil rights at me, do not for one minute think we do not have modern-day suffrage or civil rights campaigns or issues.

For example, Our West Hendon, FocusE15 and New Era are the 21st century suffragettes, taking to the streets and occupying buildings against bailiffs, often young women with families taking on the fights on behalf of others to protect their communities and at times, against Labour lead councils. For too long, Labour lead councils have ( I believe) wilfully imposed Conservative Government sanctions in a show of ‘look at what happens with the nasty party’, blaming the Conservatives for the budget cuts, rather than oppose them on a point of principle that these cuts and sanctions are unjust and force the government to come and do the dirty work themselves.

Labour have one policy, the NHS (maybe two if you count the cheap call on reducing tuition fees whilst making fun at Nick Clegg’s 2010 betrayal). Who started the privatisation of the NHS? Labour. Yes they have something about tuition fees and pandered to the youth by making some comment about people who don’t honour their pledge on fees should be held accountable, but once again these policies just play on people’s fears, rather than offering genuine hope and change. I cannot (and will not) ever condone or sanction voting for a government that gave us an Invictus Games and created the environment for the current atrocities being carried out in Syria and Iraq, a party that continues to roll out the war criminal, Tony Blair, at every opportunity to drum up support and votes, rather than eject him and arrested for war crimes.

My Grandad taught me much growing up but he once told me that he would have liked to vote Lib Dems because he thought it would have been a real change from the two major parties that had dominated for over 20 years, but didn’t because he believed it would have been a wasted vote. An excuse I have heard used regarding some parties on offer in this years election. I did not realise it then, but he had bought into the politics of fear that have come to rule and define our society, the same politics of fear that has resulted in people who should know better, calling for a vote for Labour this General Election, over a vote for the Greens, who represent a sea change and refreshing approach to politics – a real alternative to the Bullingdon old boys club we currently have in Westminster, just to get rid of the Tories.

To not vote for a candidate and party whose policies you believe in for fear of it being a ‘wasted vote’ is the real betrayal of democracy, not abstaining from it.

Now we are told to vote Labour and bide our time for a change of the rules on voting (we had an AV referendum which was swatted away by the very people who now want it) I could never and would never tell anyone how to vote. I have suggested people look within themselves to see what damage has been done to them by recent policies and events of recent governments, to vote on the ideals of self-preservation, particularly if you work in the public sector. What I do know and can say is this; so long as we continue to bow to the politics of fear, we will just continue spinning our wheels.

Be bold, be brave, you deserve better than what is being offered to you. Democracy has never been about a day out at a polling booth every five years, it has always been the battle against the bewitchment of language and daily engagements of accountability. Much more than the vote, a yearly endorsed march where you go from point a to b and go home, or a celebrity endorsement, the establishment fear the philosophy of ‘we won’t go home’.

Stand up together and fight for what you believe and you might be surprised at what you can achieve. 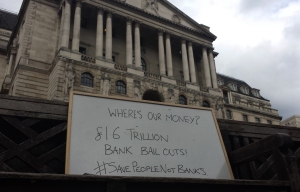 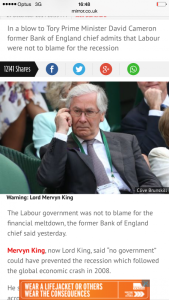