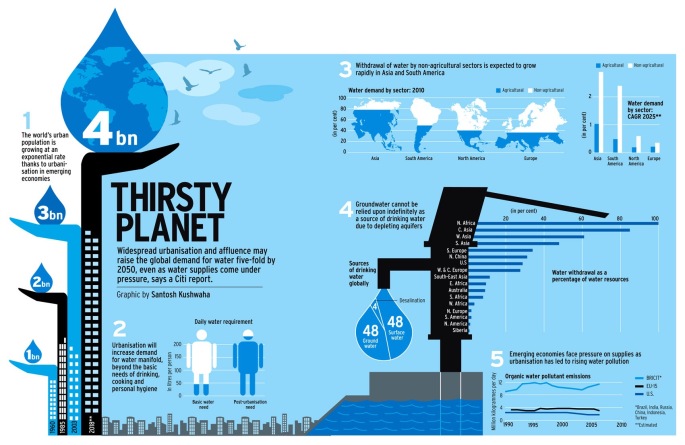 Something that irked me today was the news that we are drinking too much water, too quickly. Yes we are living on a thirsty planet. We waste water in the shower, in the bath, needlessly flush the toilet and our pipelines are in a state of decay, in the UK at least. What irked me is that somehow the emphasis and urgency surrounding our thirsty planet always focuses on the actions of people and not vampirous corporations, perpetuating overpopulation myths.

It’s not ‘the people’ sucking aquifers dry to make bottles of cancer inducing happiness that’s then transported half way around the world. It’s not ‘the people’ using antiquated farming practices to grow cattle and crops wasting billions of gallons of water in the process. It’s corporations, raping the planet for a buck and at the same time setting us on a course of impending doom.

We can change it, if we want to. We just have to be daring enough to do so. Remember, it’s not the planet that needs saving, it’s us. #savethehumans

It has been one of those great weeks of distraction. The NHS is under attack. Public services are under attack. Legal aid is gone but don’t worry, it is sunny, Wimbledon is on, the Lions are in Australia and history beckons.

What a weekend. The world is on fire, with countries such as Egpyt, Brazil, Turkey and little known Bulgaria rising up against corruption in government and here in the UK we are waiting to join in just as soon as the soaps have finished but before the X-factor starts, but then the football season kicks-off and it is world cup season too…. I am sure we will find some time to think about how badly the government are abusing democracy here. Sky News have been telling us the feel good index is up, the market s are booming and it is all to do with our confidence in the weather, Andy Murray and Warren Gatland.

The power of the social conditioning box to frame our opinions or what we think about should not be under estimated. At the same time as all this was kicking off Abu Qatada was being deported to Jordan and Theresa May and David Cameron were slapping each other on the back, again with Sky News asking the question whether or not this result after 12 years now means we need to withdraw from the European Convention on Human Rights. They may not be telling you what to think by the media is telling you what to think about.

MP’s are about to receive a pay rise with the Independent Parliamentary Standards Authority (Ipsa) stating it may be as much as 15%. This comes the week after Jeffery Osborne’s spending review speech when he slated the public sector calling for an end to automatic pay rises which have been non-existent for the majority of the people who provide our services in the first place.You could not make it up. Nick Clegg says he won’t take the money but the sideman will do as he is told.

War criminal Tony Blair has been at it again, not content with calling for military intervention in Syria the week before he now throws in his blood thirsty views of Egypt into the arena, although he effectively called on the UK public to think about what had happened in Egypt if you don’t like what is happening. Unfortunately the soaps are on.

David Cameron took an opportunity to attack Labour and their trade union history at Prime Ministers Questions (PMQs) this week. It was a “Quick, look over there, do not look at what we are up to!” moment. The idea is that unions wield too much power over Labour and are their puppets. Is he joking? The Labour fall out with Unions being talked at length by propaganda machine is a distraction. The biggest back of Labour last time they were in power was not a union but the largest media empire going, News International, headed up by the jackal Rupert Murdoch, followed closely by Terry Leahy or Mr Tesco to you and I. The rise of Leahy and Tesco was intrinsic with the rise to power of Blair and Labour.

Between them they killed of the local shop and tens of thousands of brown women and children in Afghanistan and Iraq, not to mention several thousand of our service men and women, many more of which were given bullet proof vests, only to get arms and legs blown off. Terry Leahy got a knighthood and Tony ‘the war criminal’ Blair earns £2m a year from JPMorgan and is the middle east peace envoy. Not making it up. It’s all true.

In the mean time Ed Miliband has decided he has to “mend” the union link with Labour, effectively killing off any last flicker of hope for some that Labour would start to stand for the working people of this country again instead of cosying up to big business and the war machine.
Labour AND Conservatives suck on the nipple of corporations and business, they do not care about you. They do not care about us. We are a vessel for them to suck the life blood out of to keep them and their mates in the life style they have become accustom to and they get away with it because they know we will not do anything about it until the soaps and X-Factor have finished.

The NHS is 65 and about to be retired, sold off to privateers to make profit from our misfortune. How will they make profit you might ask from providing a service to us? By making you pay through the nose for it. The potential for these vampires to make a few million pound out of us is why we face the unthinkable and despicable act of privatisation. In brief, before the NHS infant mortality, one in twenty children died before their first birthday and is one of the most efficient health services (in what we call the developed) world. If we do not offer a resistance to this then we are condemning our children and grandchildren to a world of pain.

The lows to which some will stoop to never fail to amaze me. In Liverpool this week it was reported that Atos, the SS department for the Department for Welfare and Pensions, called the police to stop experts in welfare giving advice to the sick and elderly being assessed. These people recently assessed a woman fresh from a double heart and lung bypass as being fit for work and she received a return to work letter , nine days later, the day she died in hospital. These people and this world is sick and backwards. There is no justice, there is just-us.

The papers this week have been telling you all about benefits scroungers again. This time it is a woman who has been given £500,000 house that you should be upset about, not the bankers bonuses (up 64% to £143 pound a week each on average) and certainly not the Royal Spawn, who’s bedroom had a £1m makeover. They tell you what to think about.

Finally the Ministry of Love has released a report confirming what you already knew from the constant bombardment of fear and hatred, that immigrants cause over crowding and fuel tensions. You just sit down and stay in fear of your neighbour and if you want to serve the Ministry of Love (#Miniluv) then you just be fearful and spy on them.

The people of Egypt took to the streets and gave their president 48 hours to leave office or they were taking it back. He stood his ground and the people mobilised with the largest protests and mass assemblies perhaps ever witnessed in the history of mankind. The Egyptian army, America backed, took back the office a new interim leader is in post for the time being but violence on the streets is escalating as supporters of the ejected president Morsi fight back.

The President of Bolivia’s aeroplane was forced to land earlier this week. The rumour mill was that Edward Snowden was on board. Can you imagine Air Force One being called to land because they were harbouring war criminals? Imagine that!

Water wars! I haven’t mentioned anything about that for a while but now even the mainstream media is stoking up the fear. The world is looking at a threat to the food supply as our water wells dry up. We are over pumping our ground supplies and face peak water. I like the sound of water wars better because when we face up to it, other than the air we breath, water is the most important thing to the human species. Perhaps people might want to think twice about the process of hydraulic fracturing, contaminating water to extract gas or oil, with potentially devastating environmental consequences, or go back to Coca-Cola and ask them to stop using our water for their madness inducing syrup juice.

The U.S are honouring the religious observation of Ramadan at Guantanamo Bay by only force feeding its detainees at night. That’s alright then. Thanks Barack.

Also in America an airline passenger plane crashed in San Francisco and Barack Obama has once again applauded the actions of the first responders. Be careful if you are a first responder in Yemen or Pakistan, they will blow you up with their reaper drones because you are probably a terrorist.

The football world cup is next year and this week a referee was beheaded after he fatally stabbed a player. Where’s that ticket…

Laurie Penny asked on Twitter this week what the next generation would be called, after a debate about what the present generation are called? The two point zero? Who knows, but the next generation will be called ‘The Unfortunates’. The Unfortunates because we let the corrupt take away legal aid, our freedom and liberties, social security, loading them up with £73,000 debt before they’re born, gorged ourselves on fossil fuels, ruined the environment with shale gas and gave them cancer with the way we grow and develop food and through the use of depleted uranium in our ammunition. Yes, the ‎#unfortunates . We are sorry, we had to wait for the soaps to finish but now X-Factor is on