The images this week of 3 gunmen killing journalists at Charlie Hebdo whilst at work sent shock waves around the world. People reacted strongly to the attack, the hashtag #JeSuisCharlie trended and peaceful assemblies to remember them took place all over.

I was with some police officers when news broke and the images started to go viral. My first thoughts were with the victims and their families, then the countless number of innocent Muslims that would be victimised as a result of this barbaric act. This was a vicious attack, conducted by a handful of people with significant issues but not one driven by religion.

The attacks are alleged to be in response to several cartoons published by Charlie Hebdo, that portrayed the Prophet Muhammad in a negative light. This has resulted in dozens, if not hundreds, of people coming out and expressing their belief that these attacks were an attack on the freedom of speech and expression itself. People such as Barack Obama and David Cameron. Barack Obama and David Cameron? These people have been the face of oppression, both sides of the Atlantic, with acts and bills being passed day and night that have gradually stripped away our freedoms and liberties. I do not recall any of them bleating about our rights to expression then? 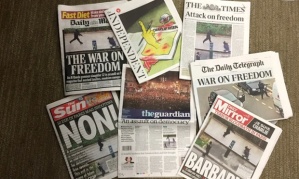 Secret Courts, TPIMs, DRIP, NDAA, RIPA, CISPA; you name it, they have passed it, to protect our ‘liberties’. If the situation in Paris was not so serious, it would be laughable to hear these people come out in their support of our freedom of expression.

The right to freedom of speech and expression is something that causes controversy; is it okay to have freedom of speech and expression if it incites hatred or intolerance, or cause offence? The main problem is the balance with which this freedom is given. Even with a cursory glance at the media you will see that the majority of views, regards certain religions or beliefs, are typically one-sided and biased.  If we are therefore to have the freedom for all to express themselves, without remit, there has to be an equal and opposite balance of views, which is something sorely missing. Some believe that our freedoms come with moral responsibility to be mindful of others.

To put the bleating of Cameron into perspective, in the lead up to the Royal wedding, the MET police went on a ‘pre-crime’ spree of arresting people who they believed would visibly oppose the wedding, sort of like the Tom Cruise film ‘Minority Report’. Is this the action of a state that supposedly supports the freedom of expression, something that we would “never relinquish” as exclaimed by David Cameron this week? But, you might say, there should be a line, it was someone’s wedding, something that people wanted to see, so you cannot speak out openly about it and disrupt the publics viewing pleasure. How is that any different to the divisive images created by Charlie Hebdo or others? Their images may have caused offence to the population of Frances’ Muslim community, and the wider Muslim community as a whole, yet there was not the global race to remove such imagery from their repertoire?

Where do we draw a line on what is the right to free expression? Do we draw a line? Should there be a line? Would the same support for this freedom of expression have existed if the cartoonists were making offensive imagery of Jews? I doubt very much so. Russia Today journalist Harry Fear said: “There’s a big difference between the right of expression and the freedom of expression. The latter concept conveys solely the ability to express; one is free to do something. It’s different to be able to do something, than to be able to do something and also to do it. In France, yes, it’s a freedom, to insult, humiliate and disrespect minorities for the sake of it, just to hurt them — but should it really be a right that one fulfils for the sake of it? Further, is it really noble to do so? Is it valuable for democracy? It is a symbolic measure of civilisation?”

What happened this week was a vicious, cowardly act, perpetrated by deeply troubled people. It has been used by the right to justify their beliefs and actions over minorities and now there are calls for the Muslim community to apologise, but why? Did we ask the Catholic church or the Buddhist temples to apologise for Hitler or Moa? Did we ask all Jews to apologise for the acts of the Israeli Defence Force in Gaza last summer? No. So why are some in society making the requirement for one group to apologise over another? For villains such as Rupert Murdoch, who it might be said are complicit in the deaths of millions of innocent people and armed forces personnel wading in to call for Muslims to be held responsible is deplorable. The religion someone is born into, the language they use to justify their actions, should not be used to perpetuate intolerance towards the wider, peaceful majority. Hitler, Stalin and Moa were all born into certain religions, used phrases such as ‘doing the lords work’ yet we do not condemn the entire faith base of their religion with the same crimes or with the same conviction. Do not do so to followers of Islam either.

The attacks in Paris this week were horrendous but the clamour by the establishment to call this the ‘war on freedom’, with the evidence and experience we have of the way in which we are viewed as subjects by our very own governments, is as callous and scandalous a move as I have seen.

Do not be undone by fear, we are more alike than we are different and do not let the seeds of fear grow doubt within you because the media says so.

George Bush says he is “doing the work of God“.