Even the worlds most liveable city, Melbourne, has social harmony issues and it’s tough being impartial covering events about fascism and counter fascism.

On the one hand you have the right, their provocative (and often illiterate) signs. Outright ridiculous claims from experts about race and religion, Sri Lankans making jokes that they went on holiday to Queensland and got a tan, hence they’re now brown (true story). They claim a country as their own, that never really was in the first place and now, they say, there is no more room at the inn. Where would these people have been if the Aboriginal peoples had gun ships turning away boats? The English certainly did not want their ancestors and the rest have benefitted from various immigration schemes themselves. I even overheard one group joking that they were all English, once. You couldn’t make it up.

Then you have the others, those supposedly standing up for human rights and rights to asylum, but they disgrace themselves by spitting and throwing projectiles at elderly women holding signs about halal food, ripping them off them to burn in the street. They isolate and physically attack supporters of fascist ideology. These supporters of fascist ideology may or may not do the same to minorities if given the chance, but it does not make it right to do it at your own counter rally when you are trying to highlight the life of violence they promote. 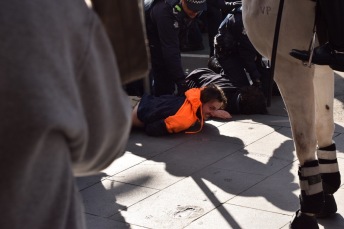 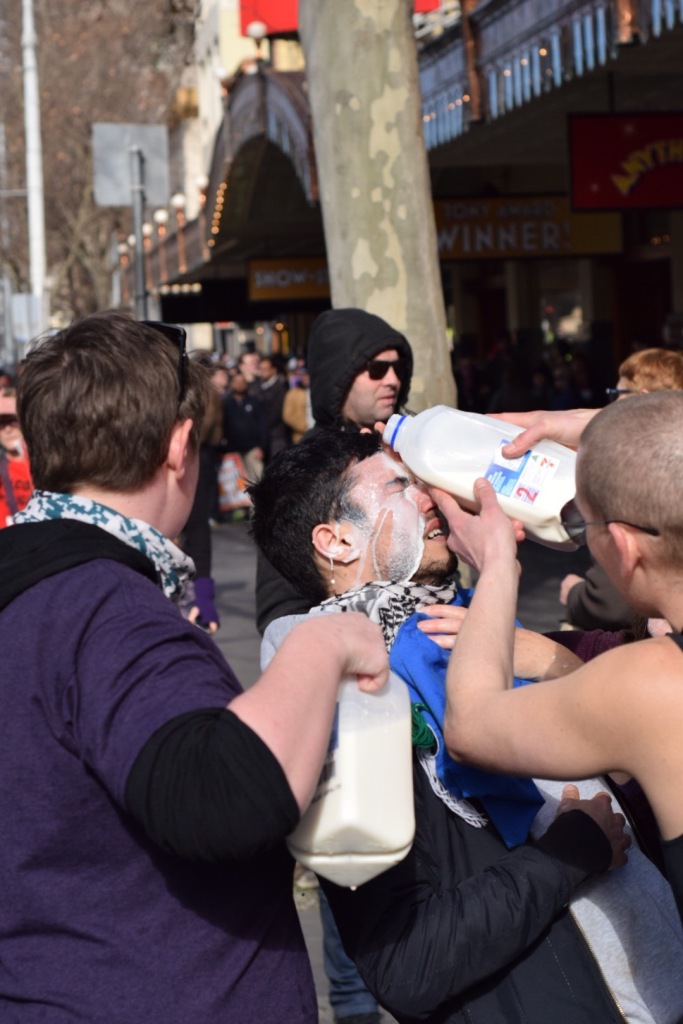 The scale of the problem is reflected in this United Nations of Reclaim Australia picture below. Nations present (not represented) include: Sri Lanka, Iraq, Scotland, England, Russia, Lithuania, Vietnam, Australia, New Zealand and others. I couldn’t keep up in my astonishment of their polished routine.

When the indoctrination and conditioning is this strong, you need something better than counter violence to influence the argument. Don’t forget, these people have been taught to hate people that they do not understand, through a systematic approach by the state and global media industry. They may have had negative personal experiences that further reinforce that conditioning. It’s a tough problem to crack but they learned this rubbish, they can unlearn it too.

Something has got to give, people. You cannot win a battle of ideology through hating more aggressively than the opposition. Another world is possible and we must all strive to act appropriately to create it.

A long, long busy day, taking pictures at a homes for people rally out in the cold. My train was delayed and I had to wait 20 minutes shivering on the freezing cold platform, but then something wonderful happened.

As I waited, a man in his 60’s came and stood on the platform along from me and he was shortly followed by a young girl, perhaps 20. We sat in silence together, I was busy reviewing some of my photos and looking at some information from the people I met today when I heard the lady ask the man if he had the train line app to see which train would get her to her destination the quickest. He said he did not have a smart phone and then went on to give her a comprehensive talk through which train would get in to which station, and at what time. It didn’t look like he worked for a train firm but his knowledge was spot on.

Although he did not have a smart phone he had something more valuable – experience.

They continued their conversation and traded stories about their day, their plans, hopes and dreams. We boarded the same coach on the train together and their conversation continued. I looked around and watched the train coach full of people sat in silence on their phones, earplugs in. The assumed position, hunched over squinting into a tiny box of lights after a long day, most likely looking at a computer screen, oblivious of the world around them – except for the man and woman who had struck up the conversation earlier on the train platform. Ironically, I felt the need to capture this ‘missed moment’ and wondered how many times a day we miss moments, however small, that may brighten our days up in an immeasurable way just because we wanted to catch up on the latest Facebook post from our friends, tweet from our favourite celebs or the sporting news? Was I missing my own moment by pulling out the camera? Before boarding the train, I found myself drawn to the Age Concern billboard ‘No one should have no one’, I thought on the train that it is entirely conceivable that the man on the train platform might not have spoken to another soul tonight until he returned to work tomorrow or wherever he came from this evening, except for the intervention for the young lady.With the technology at our disposal, we are both more connected and disconnected than at any time in our history.

How many single serving experiences are we missing every day? And yet it all seems limitless. It’s not. Life is finite and we should make the most of each moment now because we won’t get them again. Life is about our journey, not the destination. Enjoy it.