“I was only following orders”, the phrase that was used that many times during the Nuremberg Trials of Nazi officers for war crimes following World War Two that it became known as “The Nuremberg Defense”.

That was 1945-1949. Why then in 2013 is Bradley Manning, who at this time has had 1162 days of consecutive detention pending his recent trial, facing a sentence of 136 years. Bradley Manning clearly decided that what he had witnessed working for the American government was not worth following orders, superior orders or any orders and so released ‘some’ documents to Wikileaks.

The prosecution for the Bradley Manning case had a jumped up charge of ‘aiding the enemy ‘ which he was later found not guilty of. They cited the release of this sensitive information as the reason and that the actions of Bradley Manning endangered American lives. They do not however seem to think that the apache attack helicopter murdering children as being a cause for concern or the reckless endangerment of American lives, both military or civilian and least we forget the poor souls of Iraq and Afghanistan who have had our ‘liberation forces’ terrorising them daily since the Bush and Blair lies took us to war in 2002/2003. I do not believe that anyone is born evil, people are products of their environment from the moment they have an environment to be affected, but the despicable acts that are carried out by our governments daily and since the dawn of time can only be described as acts of evil and terror, of which Tony Blair, George Bush and their policy advisors are chief.

Speaking the truth today has now become an almost revolutionary act and we have slept walked into a totalitarian state of Newspeak readers of George Orwell’s Times. The establishment have managed to convince the majority of us that Bradley Manning was wrong, that he broke the law and so deserves every one of his 136 years, we are the self-appointed guardians of the status quo as such. The truth is that as we drift further from the freedoms and the liberties that we have fought for so long, the more those members of the status quo will hate those of us still willing to stand for and protect them and the easier it will be for the establishment to scapegoat and use their transference of evil to punish a 25-year-old man. 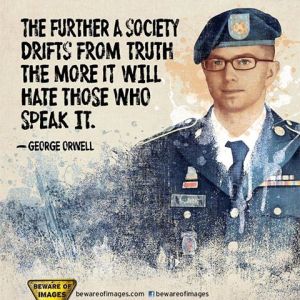 What Bradley Manning did may not be to everyone’s taste but there is a larger issue here and that is the accountability of the people we elect and the decisions they make on our behalf. In not standing up to them en masse we are as guilty as the soldiers and officers that are “just following orders” and with this we leave a young man, still 25 despite 1162 days of confinement, facing a further 136 years in prison for not following those orders, for standing his ground and governments, responsible for war crimes, being allowed to walk away without a care in the world whilst they plot their invasion and liberation of their next country.