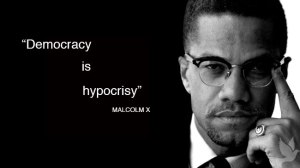 The slogan made famous by Malcolm X could not be more fitting as Boris Johnson has now TWICE over turned the London Fire Assemblies democratic rejection of his proposed cuts to London Fire Brigade by doing so again today. The cuts endorsed by Boris would see the loss of ten fire stations and 552 firefighter jobs, leaving both the public and the remaining firefighters at great risk. Strange then how in 2010 he said that he would keep firefighters and the fire engines!

The question Boris Johnson should be answering is what price a life?

At the Mayors Questions in June this year, Boris Johnson made light of the concerns raised in the gallery by the public and firefighters of his pursuit of the cuts. He saw fit to tell them to leave and laugh and joke at the questions surrounding the disproportionate affect his cuts agenda will have on the poor and the disabled and is an issue that has been covered recently by disability campaigner Adam Lotun.

Firefighters on fire engines do crucial education and prevention work for the public and these cut backs will hit the most vulnerable amongst us the hardest.

The Knight Review cited the reduction in dwelling fires as the reason for cut backs on brigades resources but it failed to comment on the correlation between the work that is done by firefighters day and night to ensure that people remain safe. Where this work fails, having enough people and resources to deal with an incident early on the initial attack are vital to save and preserve life and to protect property.

Both of which do not seem to have been considered by the megalomaniac Boris Johnson, instead he would rather concentrate on revealing blue cocks in Trafalgar Square. 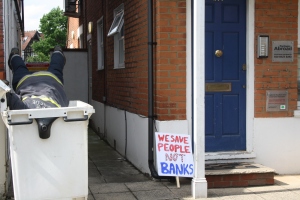 The decision taken today will mean 500 plus firefighters effectively being binned over one mans vision and like Lewisham A&E the local communities must be encouraged to help rally behind the firefighters in their struggle against the ego of Johnson and his cohorts to save vital services to their communities.

The firefighters of London and their communities did not cause this recession, bad banking practices and rogue politicians have. It is high time we followed the wealth, made a stand and too back what is ours.