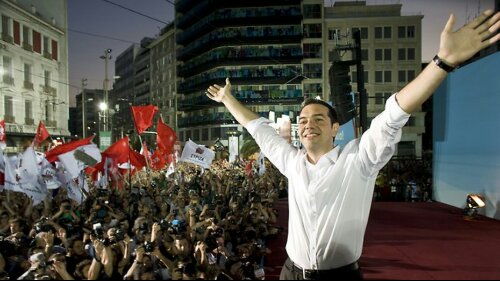 ‘SOCIALIST GREECE’ -two words many thought they would never hear, but it happened last night.

After 6 years of austerity driven by banking bailouts, the people have voted for change and an end to debt slavery. 6 years of protests, riots and rallies lead to this, change. At least on paper. Syriza might well represent the chink in the ideological austerity armour people have been waiting for, it might also well be a false dawn. Only time will tell.

Short of 2 seats for a full majority,  Syriza has entered into a coalition government with an anti-austerity, far right group to secure their plan for a change of economic path. How an alliance with a far-right group and a socialist party goes will be interesting in itself.

Let us hope for the Greeks sake that Tsipras and Syriza are more socialist than Nick Clegg and the LibDems!

Syriza will be under incredible pressure to pursue reformist policies over their more aggressive stance in the lead up to the election on Greece’s fiscal situation. The Germans have already warned Syriza that they have finanicial obligations (€240bn bailout package and the Europe Central Bank also committed to dumping extra cash into the eurozone in the days preceeding the election as markets fluctuated over fears a Syriza victory would lead to ‘The Grexit’. The hypocrisy of European leaders amd the Financial Times falling over themselves to tell Greece what they can and can’t do, when they themselves are flat broke is laughable.

The mood within Syriza had softened leading up to the snap election, as they went from an outside bet to a perceived threat in 3 years, with Tsipras toning down the rhetoric of “tearing up the economic package” that has crippled Greece, to one of measured negotiation and refinance. What they should do is take a lead from Iceland who jailed bankers and bailed out their people, not the banks. The people of Greece have suffered significant increases in homelessness, poverty and unemployment – all on an unimaginable scale, they deserve better.

Syriza might stem the flow but will they turn back the tide of austerity if the weight of corporatocracy comes down on them? As one woman put it when she said she had “nothing left to lose” by voting for them, they became charged with resurrecting the dreams of not only a nation but an entire movement throughout Europe. I have seen people who have never voted before committing publicly that they will vote for the Green Party in the UK in May, on the back of the election result in Greece last night, such is the power of the feeling of hope.

The people have voted in Greece because they want to show Europe and the money lenders that they have had enough of austerity and slavery, Europe must hear this and act accordingly to save people and not keep saving banks.

I just hope Syriza are daring enough to have the courage to not be the party the people need right now, but the one that people really deserve.

A recent trip to America yielded the usual jokes about rendition and being sent to “Guacamole Bay” as one of my mates called it but I was not concerned, that was until I approached the immigration desk and saw that they were taking everyone’s biometric data (retina scans and fingerprinting) I was not amused.

Having never been in trouble I was miffed as to why I, along with the thousands of others, was being arbitrarily finger printed just to enter the land of the free. I entered into a lengthy debate with my immigration officer, my first question being: “Why are you taking my fingerprints?” The answer: “So that we have your prints on record incase anything happens during your stay.”

What happened to being innocent until being proved guilty?

I tried to explain the absurdity that they were taking people’s finger prints on the assumption that they may be a (shh) “terrorist” or a criminal of some sort. Would they then destroy my records if I left the country without incident I asked? “No, we will now have your records on file and so will others.”

So not only do they steal your biometric data but they then palm it off to every man and his dog. If you are concerned about identity fraud and shred your papers on a weekly basis, don’t bother. At the rate they are stealing your information it is already open source.

The lady at the immigration desk was pleasant enough, although she seemed mildly amused at my agitation for having never been in trouble and yet still having to be vetted like a criminal. I asked if she thought it was bad that in the year 2013 we treat everyone as an enemy of the state but she declined to comment.

I tried not to let it sour my experience of what was a relatively pleasant journey (minus the coach ride but that’s another story) and reluctantly put my hand on the scanning device. As I was doing this I wondered how the public have allowed themselves to be railroaded and sleep walked into this 1930’s Germany style security checking. Would these people be as happy to do their finger printing if say they had to get thick black ink on their hands and have it pressed into paper like they did not so many years ago? Probably not. Technology has advanced our lives in so many ways yet at the same time, due to the actions of war criminals and the worst purveyors of violence – our governments, we are having this technology turned against us and the simplicity of it is convincing us it is fine.

“If you want a vision of the future, imagine a boot stamping on a human face forever” ~ George Orwell -1984