Tomorrow my nephew, like many other children across the globe, will celebrate his 7th birthday. He will blow out candles, eat cake and open Lego presents. That is the harsh reality for many children and parents as the sunsets this evening.

Elsewhere children are given handguns and stuck in the back of jeeps to fight for their lives, are blown up on the beach playing football whilst dreaming of being the next Ronaldo, or are held at gunpoint in front of their parents and yet the wider public say and do nothing. Why? We should not beat around the bush, it is because successive governments and mainstream media outlets on both sides of the Atlantic have told us that the words ‘Muslim’ and ‘Islam’ are synonymous with terrorism. We have been bred to view Muslim’s and Islam as aggressors ‘getting theirs’. The middle east peace envoy and war criminal Tony Blair said as much on the BBC recently when he said Israel has the right to defend itself in this conflict.

Where as the world rose up against apartheid in South Africa, it sits idly on its hands whilst a modern-day holocaust plays out in front of our eyes and our media is complicit in this.

They use terms such as conflict and war to give the viewer a sense of parity to what is happening in Palestine, the reality is that the Israeli Defence Force (IDF) is shooting fish in a barrel, only it is women and children who are at their mercy. The power of our language is always at its greatest during atrocities, we find all manner of ways to justify or legitimise what we see by way of our language. This is not a conflict or a war, it is a holocaust, an attack on indigenous people on their way of life by an occupying force, we and our media should start calling it just that. Even the term Israeli Defence Force, versus the more common Hamas Militants, is a one-sided way to describe the two opposing forces; one is a defender of the people, the other the aggressor, but which in reality is which? 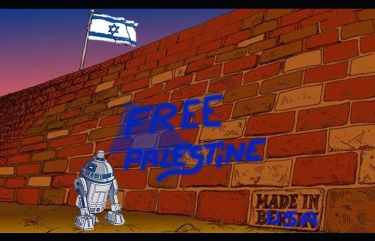 Our governments have remained silent, David Cameron has given Netanyahu his staunch support, but it is because of our historic complicity in the events unfolding today – our governments pursuit of imperialist aims which drives their silence. If we want justice for Palestine and the innocent Jewish people who are swept up in these atrocities, then we must take collective action. If our media refuses to cover these events unbiased, then we boycott, them. The papers, the T.V license, whatever it takes and by any means necessary. We boycott the goods that pay for the weapons of mass destruction that the IDF is using against innocent children, such as the oranges and other fruits sold here in the UK and lest we forget to hold the American government to account for the role they play in appeasing the violence perpetrated by the IDF and the political elite on the people of Palestine.