THE MADHOUSE has been overrun and they have left a calling card. A toy plastic credit card.

The Early Learning Center toy where your child can learn everything about money except for the fact that it is not real to begin with, or that the plastic your children are playing with actually has more intrinsic value than the digital numbers floating around the ether that determines whether people eat or not because it is the byproduct of a million years of fossilised flora and fauna.

The Early Learning Center toy comes complete with plastic money and credit card, where your child can learn about money and how to get in to debt with their plastic friend, not taking in to consideration the fact they were £73,000 in debt before they were even born. Of course, these toys are hardly new but there is something genuinely crazy about the way the world is going. 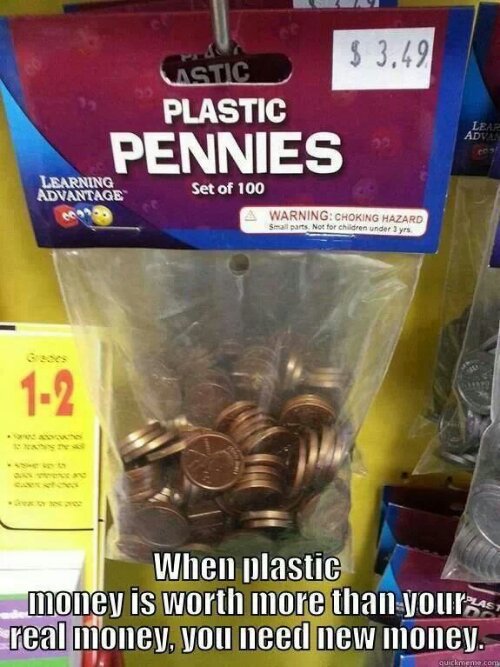 A meme sprang up this month of a bag of 100 plastic pennies worth more than $3 (or £2 something) which questioned the sanity of paying more for fake money than the value of its real life equivalent.  I just could not get my head around this and thought it was an early April Fool’s, so I took to the Internet to find out the truth and this is when I found the new credit card toy from the Early Learning Center and had a mini meltdown.

If only I had just gone to bed.

The sad thing is that parents really feel that they are doing their kids a favour by purchasing this crap and calling it educational, but we cannot criticise because they mostly know no better themselves about the truth of money and so the cycle continues. It is a 360 degree immersive advertising campaign, designed to do one thing; ensure perpetual debt slavery.

The problem comes when people have become so embedded in the lie that it makes it hard for them to see the truth, that the monetary system they put so much trust in is just a ponzi scheme, built on debt and that mortgage defaults and bankruptcy are inherently built into it. The only reason it endures is because of the blind faith we as a society have put in it. It is the reason we have austerity, library closures, cuts and closures to our emergency services and privatisation of our NHS. You couldn’t make it up.

The first step to breaking free from our chains is to first see that we are imprisoned. A good start would be the group Positive Money, another would be this video by Peter Joseph from The Zeitgeist movement in 2008.

Right now I am going to get my head and just remember that “everything is awesome.”