Today more than 50 firefighters from across the UK convened in Brentwood Essex, to tell the public they save people, not banks.

Concerned by the ideological austerity of this government and its effect on the public, they came with an assortment of props, from being dressed as elderly firefighters with inflatable zimmer frames and walking sticks to highlight the scandal surrounding the governments pensions proposal, to toy fire engines being pushed by people on their hands and knees with anti-cuts and privatisation slogans on them.

The message to the public being clear, that they are standing up for them in the face of these ideological cuts and austerity measures and that they are encouraging them to stand alongside them.

As one speaker put it at the end of the art performance: “The role and sole purpose of a firefighter is to serve the communities they live and work in, through prevention and education, but crucially through responding to emergency calls in their time of need. This lifetime of service to their communities also covers what we are doing today; standing up to the ideological austerity which affects us all, but even more so those people without a voice, those people with the least amongst us and those waiting to find their voice. It is about more than pensions and fire stations closures, it is about the very futures we encourage our children to have, being stolen away quite literally from under their noses.”

The firefighters started from one end of the high street in Brentwood, stopping briefly for some picture opportunities with members of the public at the nearby Sugar Hut, made famous by The Only Way is Essex, before bumping into Ricky Rayment from the same show. He stopped to talk to the firefighters and expressed his support for the movement and said: “They (the government) are taking the piss with austerity and pension attacks.” 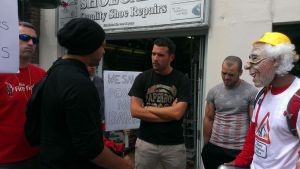 Brentwood did not happen by chance, it is the home of Communities and Local Government fat cat, Eric Pickles, the man referred to by George Osborne this week as being an excellent example of lean government, just days before the news broke that his department had been cooking the books and in fact had £200m over spend on their budget. No I am not making this up.

Eric Pickles was one of seven department heads to sign up early to George Osborne’s £11bn cuts program back in May 2013 without a second thought for the effect this will have on the services provided to the public but their way of life. So he (Pickles) features as one of the usual suspects in the movement that is accompanied by the slogan “we save people, not banks.”

As the firefighters made their way up and down the high street they turned in towards the Conservative Office where they were duly informed by another nervous aide that Pickles did not in fact use that office, raising the question of what the people of Brentwood are to do if they want to meet and discuss any issues in with their constituent representative? Unimpressed they left him a message and a souvenir.

These rank and file firefighters called for the public to stand with them shoulder to shoulder today and in the future and they responded with the crowd swelling. Throughout history change has been created by the collective actions of people united, not by individuals as much of recent history has tried to convince us.

These firefighters are standing up for those with the least amongst us, those without a voice and those waiting to find their voice. Their message? That they save people, not banks and their criminal practices that led to this global recession.

A fire has been started and the fire rises.

2 thoughts on “The fire rises in Brentwood”